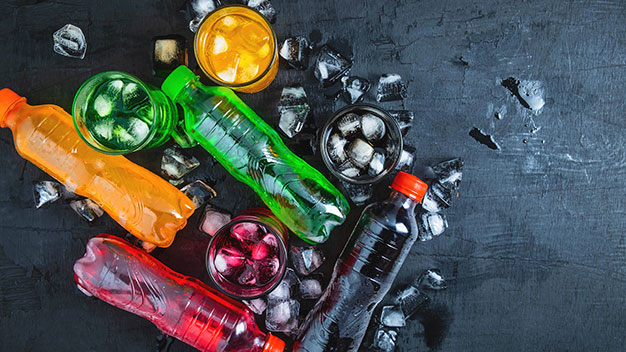 Many of us are accustomed to consuming soft drinks with our food every day. They are quite refreshing and usually “trick” us, as they replace our appetite for sweets, due to the increased amounts of sugar they contain. Nevertheless, it is not a healthy habit. Excessive consumption of sugar through soft drinks “pushes” the pancreas to produce even more insulin, so that glucose is transported to our cells by the bloodstream.

In this way, insulin levels in the blood rise rapidly, a condition that can lead to insulin resistance and functions as a precursor to the onset of Diabetes, a Chronic and Metabolic Disease that afflicts millions of people worldwide, significantly degrading their quality of life. The most common disorder of all forms of diabetes is hyperglycemia, a condition in which blood sugar levels are high.

Soft drinks as a hallmark of Diabetes

Within the first fifteen minutes after consuming a soft drink, sugar enters the bloodstream through the intestine, resulting in a rapid rise in blood sugar levels. Sugar must be converted into energy and distributed to the body’s muscle tissues. Insulin is produced by the pancreas in order to transport sugar to the muscles for energy. However, soft drinks contain much more sugar than the muscles need. When someone drinks a can of soft drink, the amount of carbohydrates that he consumes is equivalent to that of a whole meal.

Elevated carbohydrate levels need to be processed and the excess is converted to fat in the liver, instead of being used by the muscles. Over time, this can lead to non-alcoholic fatty liver disease and an increase in fat around the abdomen and organs, which is known as visceral fat. Visceral fat is associated with a high risk of developing type 2 diabetes.

Association of soft drinks with Diabetes based on research

A new review of studies concluded that the consumption of sugary drinks, such as soft drinks, contributes to increased chances of developing Type 2 Diabetes. Different sources of sugar for controlling blood sugar levels have been studied by researchers at the University of Toronto, led by Dr. John Sievenpiper. Sugary drinks have been found to contain very few nutrients and, on the other hand, provide many calories, with detrimental effects on blood sugar levels. According to a Harvard University study, consuming two cans of soft drink a day increases the chances of developing type 2 diabetes by 26%.

It is worth noting that until recently, scientists were convinced that sugary drinks are associated with the onset of diabetes, due to sugar, which contributes to our weight gain and excess body fat causes resistance to the action of insulin. However, a new study suggests that each sugary drink which is consumed per day increases the risk of developing type 2 diabetes by 13% within a decade.

According to Fumiaki Imamura, senior investigator at the MRC Epidemiology Unit, University of Cambridge School of Clinical Medicine in England, “Sugary soft drinks contain more than seven teaspoons of sugar per box, and consuming this amount leads to a sharp rise in blood serum sugar. “Over time, this condition can contribute to increased insulin resistance even in people with normal body weight.”

“The body is initially able to cope with this condition, but due to the cumulative action, its endurance gradually decreases and as a consequence the appearance of Diabetes occurs”, as he also stressed. These findings are based on data from 17 previous observational studies which were conducted with 38,200 participants.

The importance of preventing diabetes

Our body is actually a colony of trillions of cells, which are responsible for maintaining life and promoting the proper function of the body. They achieve all this through homeostasis, a process in which, despite any external changes, the conditions within the internal environment of our body are kept constant. Continuous deviations in cell function at a biochemical level can accumulate for years, lurk and at some point be expressed in the form of a disease.

Imagine an engine that does not only have the necessary fuel for its proper operation, but at the same time is charged with things that should not be there and cause disturbances in its operation. It is certain that the engine will malfunction. Something similar happens in our body. The only difference is that this burden is insidious, as insidious is considered Diabetes, because many times it does not manifest with symptoms. Patients, even for years, are unaware that they are ill. In fact, it is a disease of multifactorial etiology, with the causes focusing mainly on hereditary predisposition, lifestyle and diet.

For this reason, it is vital not only to avoid the consumption of soft drinks, but also to adopt a diet rich in micro- and macronutrients, which promotes the health of our cells and can then be effective in preventing the onset of Chronic diseases such as Diabetes.

Prevention and treatment of Diabetes with individualized treatment protocols

The key to a successful outcome lies in the medical guidance and personalized nutritional plan that will be suggested to us. Therapeutic (Molecular) Nutrition is a special nutritional platform, the success of which lies in the fact that for each diet plan it proposes, builds a solid foundation for the creation of healthy cells, with accompanying results in achieving optimal health of the body.

Of course, diet alone is not enough to prevent diabetes. Regular monitoring and better management of insulin levels, through specialized tests, could effectively help prevent the onset of diabetes and many other chronic diseases. Nevertheless, even if someone develops Diabetes, there are ways to deal with this metabolic disorder and get our body back to its original balance.

The biochemical diversion at the functional level of an organism can be assessed through relevant biochemical or metabolic tests and based on the diagnostic findings, individualized treatment protocols are formulated, which may include micronutrient protocols or the administration of Natural “Biomimetic” hormones. Thus, through the restoration of the biochemical balance of the cell, the restoration of the normal function of our organism is gradually achieved and the health of the patients is promoted, while their quality of life is significantly improved.