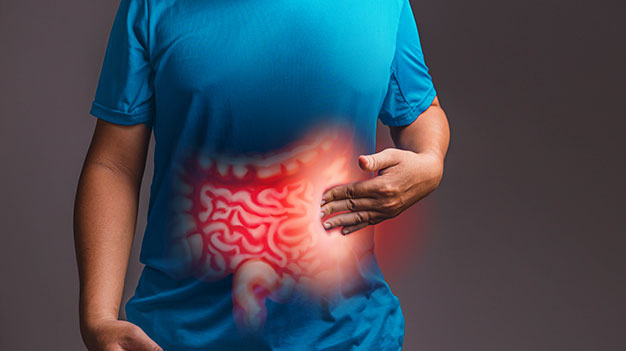 Posted at 13:38h in Metabolic Diseases by DrKoini
Share

Irritable Bowel Syndrome is defined as a functional bowel disorder that presents with symptoms of chronic abdominal pain, discomfort, and abdominal distension (bloating).

Irritable bowel syndrome is quite common disease, as it affects around 60 million people worldwide, of which only 10-20% seek medical help and guidance.

Irritable Bowel Syndrome is a multifactorial disease. An article published in the American Journal of Gastroenterology has identified the role of allergies and inflammation which are caused by certain foods in the development of the disease. Irritable Bowel Syndrome can be successfully treated by detecting and eliminating the causes that cause it.

The causes of Irritable Bowel Syndrome

Based on scientific research, many different causes have been reported as responsible for the onset of the syndrome. The three main ones are food allergies or sensitivities, the excessive growth of bacteria in the small intestine, as well as the overgrowth of fungi that results from disturbances in the balance of the intestinal flora. The inner lining of the intestine, where our microbiome resides, may be affected by other factors, such as the following:

All these factors contribute to the activation of an immune response that disrupts the intestinal nervous system, with the final consequence of the manifestation of irritable bowel syndrome. It is worth noting that hormonal imbalances can play a key role in the development of irritable bowel syndrome. In particular, during menstruation, estrogen levels decrease and progesterone levels increase in the luteal phase. Thus, the expression of the serotonin receptor in the intestine is increased, as a result of which the intestinal symptoms worsen (increased mobility) and the visceral sensitivity to pain intensifies.

According to various researches and studies, there are certain foods that can cause irritation in the intestine and digestive system. Such food allergies are not a real allergy, like shellfish allergies, but a milder allergy, which, however, may lead to the onset of symptoms.

Gluten sensitivity is one of the common sensitivities to food. Milk, soy, wheat, eggs as well as foods high in amines (e.g. chocolate, wine, banana) or salicylates (e.g. nuts, corn, wine, coffee, tomato) are, also, foods that are largely associated with the exacerbation of symptoms.

In fact, a significant percentage of patients with Irritable Bowel Syndrome have been found to be lactose intolerant, a condition that can contribute to diarrhea and flatulence.

Foods suggested for the treatment of Irritable Bowel Syndrome

Since nutrition plays a key role in the onset of the syndrome, it is understood that a change in our eating habits can be effective in relieving the symptoms of irritable bowel syndrome.

The inclusion of protein in the diet, which is contained in fish, turkey and chicken, can help reduce the severity of symptoms.

Patients with Irritable Bowel Syndrome should include in their diet foods high in fiber, such as vegetables, which contain vitamins, minerals, antioxidants and anti-inflammatory molecules that help treat the disease.

Furthermore, it is recommended to include in the diet nutrients that restore the intestinal lining, such as zinc, vitamin A, glutamine and omega-3 fatty acids, contained in fatty fish and fish oil. Some herbs, such as turmeric, can help reduce inflammation.

In fact, it is considered necessary to include prebiotics and probiotics in the diet. Prebiotics are substances that promote the growth and maintenance of pre-existing intestinal flora. On the other hand, probiotics are living microorganisms that contribute to the balance of the intestinal flora, because they prevent the growth of pathogenic bacteria and the entry of harmful microorganisms, while promoting the growth of friendly (non-pathogenic) bacteria. Probiotics can be obtained through dietary supplements, as well as through the consumption of yogurt.

It is recommended to remove from our daily diet starchy (bread, cereals, pasta) and sugary processed foods, as these foods are considered harmful to our intestines.

Some drugs, alcohol, caffeine and legumes

Alcohol consumption, as well as antibiotics, steroids, contraceptives or antiacids should be avoided, as they all promote the growth of fungi in the gut. In fact, it is recommended to avoid consuming caffeine and legumes, because they cause “bloating”, and it is advisable to drink a sufficient amount of water (2-3lt per day).

It is advisable to limit intake of lactose, fructose and other saccharides to patients with established sensitivity. It is also recommended to avoid the consumption of processed foods, such as soft drinks, because they affect the metabolism of sugar and lipids.

Of course, changes in eating habits are not enough. As hormone levels are affected by a variety of conditions, it is necessary to investigate the cellular biochemistry through special biochemical, hormonal and metabolic tests, as such fluctuations determine the onset and exacerbation of irritable bowel symptoms. Therefore, treating these abnormalities is vital for the remission or even complete elimination of the symptoms.

Effective treatment of Irritable Bowel Syndrome generally requires identifying the underlying causes that led to the problem. This is where the role of Modern Medicine lies. The principles in which Modern Medicine is based are the recognition that a disease can have many causes or that one cause is likely to be responsible for many diseases.  For example, if there are ten patients with irritable bowel syndrome, the causes may be different for each of them. Therefore, there are different approaches and methods, depending on the underlying causes of the disease.

Based on diagnostic findings, individualized medical treatments and protocols are developed, which contribute to the targeted treatment of deficiencies and the removal of the toxic burden. Through these methods, a definitive solution to the problem can be given, while at the same time health is restored at the cellular level. The recurrence rate decreases significantly and patients’ quality of life improves.