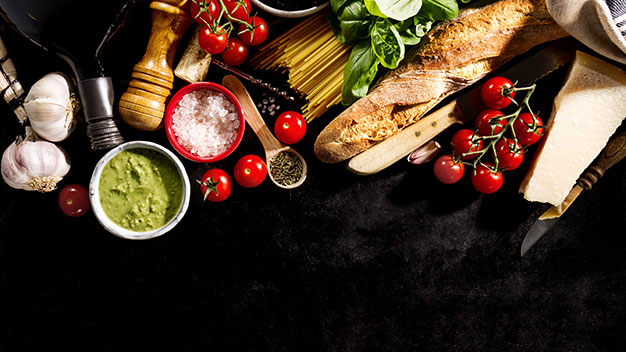 06 May The Mediterranean Diet today

The Mediterranean diet is a modern eating habit which is originally inspired by the eating habits of Greece, southern Italy, France and Spain in the 1940s and 1950s.

The model of the Mediterranean diet is gaining more and more ground in recent years, as many studies suggest that the inhabitants of the Mediterranean regions show decreased percentages of coronary heart disease and various forms of cancer, than those living in Northern Europe and America.

International research considers the nutrition in the island of Crete as the best and most characteristic example of the Mediterranean diet. Simple diet, rich in herbs, fruits, fermented black bread, pure cheese, foods cooked in olive oil. Exercise was also an important factor for the good health of the population of Crete. Thirteen kilometers of walking a day was the natural way of exercising the Cretans. So it is not completely correct to talk about the Mediterranean diet but about Greek and especially Cretan.

The traditional Mediterranean diet has the following basic characteristics:

The high consumption of vegetables, fresh fruits and in particular the consumption of olive oil in combination with vegetables and legumes, can offer a great deal of protection against a wide range of chronic diseases.

In 2011 the VSDA (Ministry of Agriculture) announced the food plate that should replace the classic food pyramid. This includes:

The ideal diet should be low glycemic index, high in micro – macro nutrients, fiber and good fats. This will lead to a reduction in body fat, an increase in energy expenditure, a proper hormonal response through diet, and an increase in satiety through the proper function of neurotransmitters.

The Mediterranean diet through research:

According to a recent study by Spanish doctors, the main component that gives the Mediterranean diet its beneficial effects, is its high fiber content.

The research was conducted by Greek and American doctors and included 22,000 people aged 20 to 86 for a period of 4 years. Their findings showed:

In an interesting large study, doctors from Harvard University examined 25,623 Greeks of various ages (10,582 men and 15,041 women), the relationship between the Mediterranean diet and the risk of cancer of any kind. The mean follow-up time of the participants was 7.9 years. A total of 851 medically confirmed cancers were recorded (421 in men and 430 in women). The analysis of the findings showed:

Unfortunately nowadays, when we refer to the traditional Mediterranean diet, we can not claim that it is followed by all or even most of the inhabitants of the Mediterranean countries. This dietary pattern is slowly but surely being abandoned.

Every day our diet changes, unfortunately to the detriment of our health, as we move away from traditional lifestyles and get involved in the rhythms that are imposed on us by the modern era with fast and ready-made food. So we would say that modern Greek cuisine is now evolving into an “other cuisine” that is a mixture of older elements and preparations.

So, concluding with what Hippocrates said “Let food become your medicine”, the Modern Medical Approach proposes that “food is information”. That is, the means of activating genes and their expression. Nutrition affects health through Epigenetic factors (for better or worse), the phenotype or not of each individual and their future offspring.